Cats Paying Dues opened and closed the first session of the TED Fellows retreat back in August 2015. It was an awesome experience to bring tap dance to the TED stage and share the opportunity with a group of local San Fransisco tap dancers. We met them all the day before the show and put together a brand new piece reflecting on the unique nature of tap dance and the tap dance community based on those old standards the Shim Sham, and B.S. Chorus.

Check out the article about the event and a super cool video of the performance on the TED Ideas Blog here. 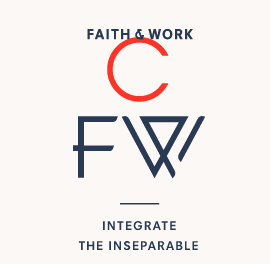 Our artistic director, Andrew Nemr, has been awarded an Artist In Residency from the Center for Faith and Work for a proposal of Cats Paying Dues’ collaboration with Max ZT and House of Waters. The collaboration, entitled Entering the Waters, will be featured the in the upcoming WORLD PREMIERE of THREE SUITES at BMCC Tribeca Performing Arts Center.

Check out the Sneak Peek Trailers for Entering the Waters here.

VIP* Tickets for May 13th performance include Post-Show reception

All tickets for May 16th performance include Post-Show Artist Talk Back.

Get Your Tickets Here 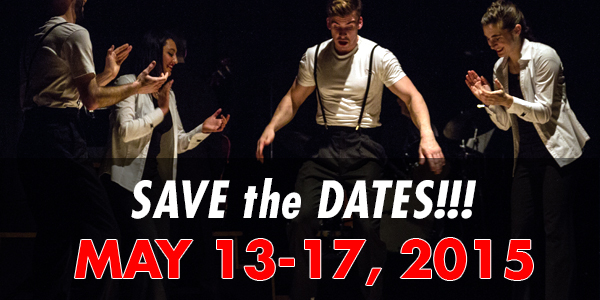 Save these dates!!! Earlier this week we put the deposit down for our theatre and secured a week worth of dates for the premiere of Three Suites – including our collaboration with Max ZT and House of Waters. Keep an eye out for the poster for Three Suites…coming really soon.

Rehearsals have been going really well and we’re super excited to share these new pieces with you this coming May. Mark your calendars, invite your friends, and sign up for the email list to find out when tickets go on sale! 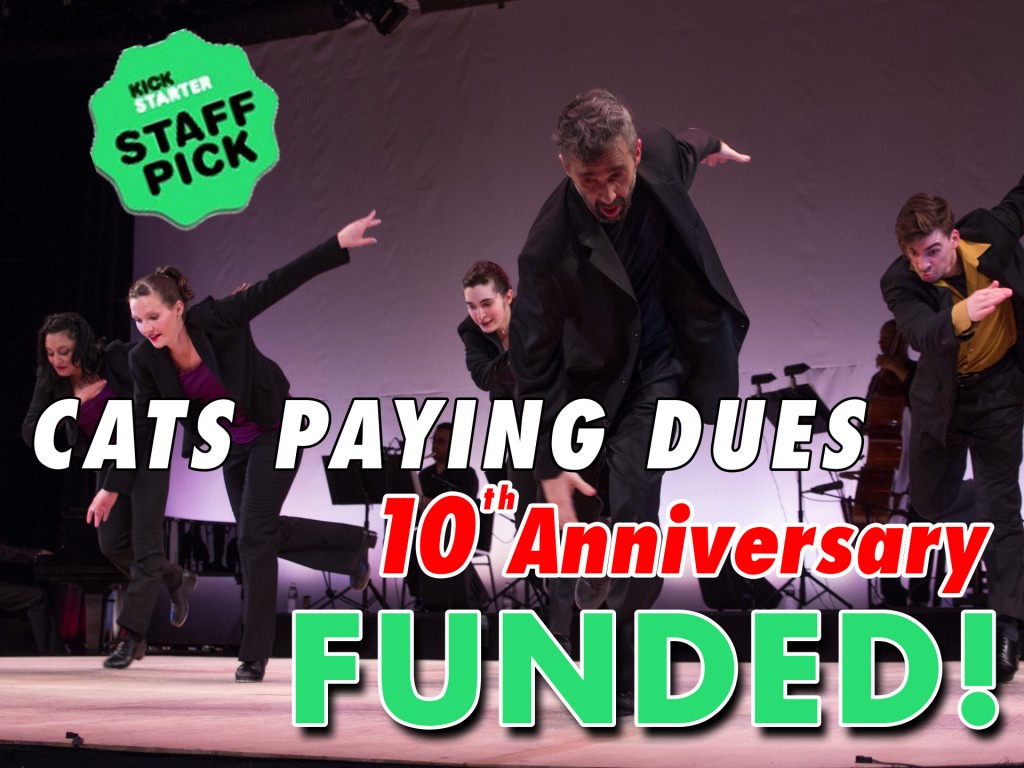 Okay, we had to get the excitement out of the way. But really, the past few weeks and especially these last days have been a total whirlwind. Our artistic direct Andrew Nemr had personally sent out over 3500 messages on Facebook – that’s a lot of  computer time for a tap dancer. But we made it. Actually YOU made. Our kickstarter backers, at all levels, made this campaign a success!

We just want to take a moment to thank everyone who helped make this possible. For every dollar pledged, every link shared, every piece of advice given, every ounce of moral support offered, and every note of encouragement spoken, we are very grateful!

Thank you all for making this a possibility. We are super excited to start working on the new material and sharing it with you!!!

In the meantime. Have an amazing Thanksgiving! 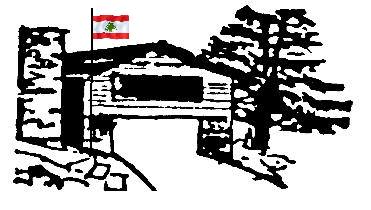 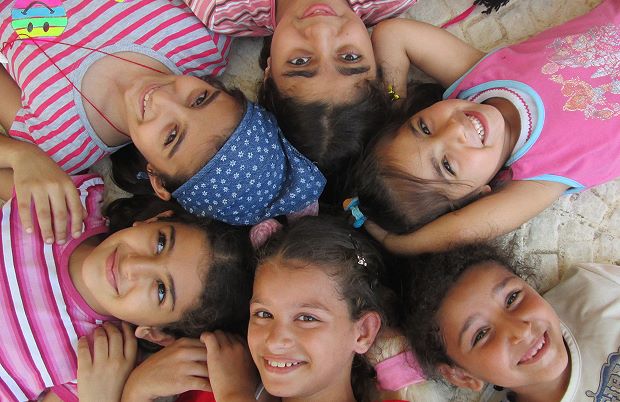 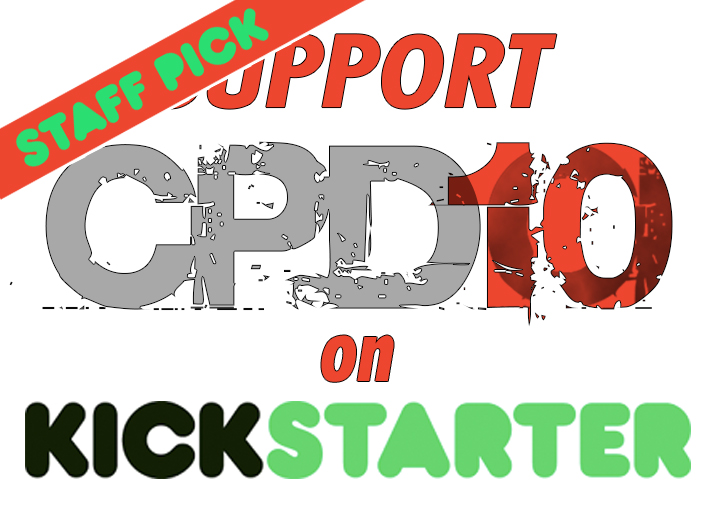 Every day Kickstarter features a project in each one of its categories. Today CPD10 will be featured in DANCE. It’s a huge honor to be chosen to be featured among so many amazing projects. Check out the page and support live performance by backing the CPD10 Kickstarter Project.

Cats Paying Dues has been extremely blessed to work with amazing creative collaborators throughout our history. From our production designer Rob Harari, to various musical directors including Tommy James and Gregg Kallor, and this season composer/musician Max ZT, our collaborators have been an integral part of bringing our work to life. We’re so happy to welcome lighting designer Nicholas Houfek to the team for CPD10. Nicholas came to us highly recommended and just about saved the day during a production of Echoes In Time last season. He returns to us for CPD10 and the World Premiere of Three Tap Dance Suites. Check out Nicholas’s bio below. We’re super excited about having him with us for our 10th Anniversary. 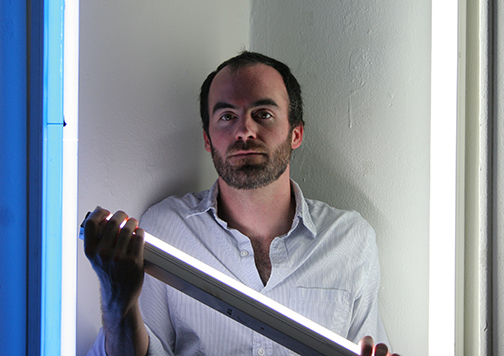 A special thanks for everyone who came out to the Kickstarter Launch Party at East Village Social this past Monday. Hosted by the Quarterly Arts Soiree, we had an awesome time with company members Mallory Davis, Jason Stump, Allie Pizzo, and Jess Gersony (and past members Claudia Rahardjanoto and Gemini Quintos!!!). 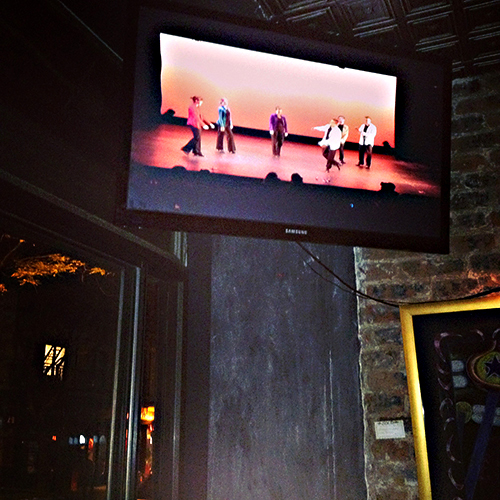 The night started with vintage CPD clips running on the bar’s TV. Footage from All For Love and Cats In Concert, as well as this clip from Max and Andrew’s first duo collaboration all made it to the big screen.

Then it got live with Max ZT and Luke Notary of House of Waters playing an awesome set with Andrew J. Nemr – a little teaser of what’s to come with our CPD10 collaboration. Members of CPD PLUS took over the floor during the night, filling EVS with tap dancing. The sound was so good, people walking by stopped in just to see what was going on!!

Food from EVS’s full kitchen was delicious and provided care of our hosts at the Quarterly Arts Soiree!!! 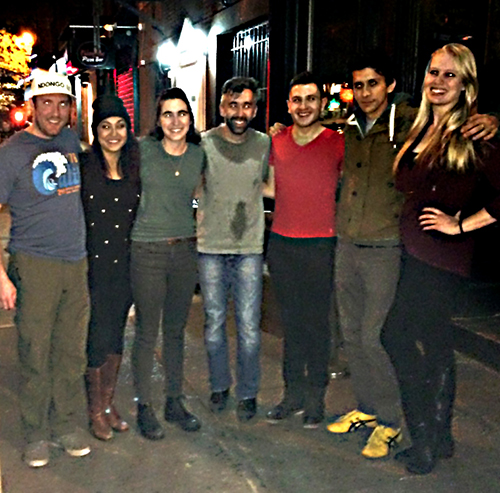 And so it was at the end of the night – Luke Notary, Allie Pizzo, Jess Gersony, Andrew Nemr, Jason Stump, Max ZT, and Mallory Davis. Thanks again to everyone for coming by, and don’t forget to check out the CPD10 Kickstarter Project.